Proteins and peptides are the building blocks of life and are a very promising basis for targeting a range of diseases. Throughout the past 30 years, and especially the past 10 years, there has been a rapid growth in the development of therapeutic proteins, with a significant increase in the number of protein-based drugs on the market.

Small molecule drugs have traditionally dominated the treatment of human disease given their diverse mechanisms of action and ability to address a variety of indications and conditions. Not surprising, the small molecule drug market is comprised of multiple therapeutic areas, including oncology, central nervous system, cardiovascular, metabolic, respiratory, orthopedics, immunology, rare diseases, and other therapeutic areas.

Small molecule drugs are most often used in targeted drug delivery in which the small molecule passes through the cell membrane and acts on the specific cellular organelle or protein. Because of their small size and physiochemical properties – such compounds are typically comprised of 20 to 100 atoms and have a molecular mass of less than 1 kilodalton, often less than 500 daltons – small molecule drugs are effective enzyme inhibitors and allosteric modifiers and can target extracellular proteins or intracellular receptors in the cytosol or nucleus. Additionally, these molecules can prove better than monoclonal antibodies and other large molecule drugs due to their size and cost-effectiveness.

Adding to the excitement around small molecule therapeutics, a recent evolution in the advancement of small molecule drug targeting has enabled the introduction of several new technologies which offer considerable promise. Among these are peptidomimetics and macrocyclic therapeutics, which represent a nexus between classic small molecules and peptides. The growth of these and similar technologies has resulted in a “blurring of the line” between peptide and small-molecule APIs, as more “peptide” drugs incorporate D-amino acids, non-natural amino acids, and are being made as cyclic compounds.

With their growth, these new classes of small- to medium-sized molecules bring with them added challenges. For example, as these new modalities target receptors that are buried deep in hydrophobic domains, the actives themselves are becoming more hydrophobic and so less water-soluble. To aid in both their function (binding to hard-to-access receptors) and form (conferring some degree of water solubility, membrane permeability, and conformational flexibility), these new active moieties compensate by having chemical groups that are flexible and offer some degree of water solubility by way of, for example, hydrogen bonding. As a result, most of the molecules in this class of actives do not conform to Lipinsky’s Rule of 5, having molecular weights between about 500 and 1500 Daltons and a good number of hydrogen bond donor and acceptor groups.

Despite these challenges, new modalities of small molecule and mid-sized therapeutics offer numerous advantages, and interest in such drugs is strong. Paramount among the obstacles that may hinder their continued growth include the aforementioned trend towards developing drug candidates with low solubility and non-Rule-of-5 chemistry. In fact, there has been a significant trend in the innovator pipeline towards low solubility drug candidates, with estimates suggesting that 90% of drugs in development (pipeline candidates) fall into the two low solubility categories of the Biopharmaceutical Classification System (BCS). This is a significant number, especially when compared to the less than 36% of marketed drugs falling into these two classes.

Similarly, BCS class IV drugs exhibit many characteristics that are problematic for effective oral delivery. Some of the problems associated include low aqueous solubility, poor permeability, erratic and poor absorption, inter- and intra-subject variability and significant food effects which lead to low and variable bioavailability.

Given these barriers, some BCS class II and class IV drugs are administered parenterally, either via subcutaneous, intravenous, or intramuscular administration. While the market for injectables is strong and growing, alternative administration forms such as oral tablets or capsules are strongly preferred by both patients and prescribers.

This trend is guided by three dynamics – patient compliance, prescriber preference and market expansion. As one can appreciate, frequent injections, inconsistent blood drug concentrations, and low patient acceptability make parenteral administration of small molecule drugs less desirable. Thus, one of the main questions for the drug delivery scientist applying novel formulation designs to BCS class II and class IV drug candidates is how to effectively overcome the low intrinsic solubility, or both poor solubility and permeability, of the active in the GI tract and the resulting poor bioavailability.

Conventional oral drug delivery systems are typically built on the usage of well-accepted excipients. However, because class II and class IV compounds are nearly water-insoluble, a sophisticated application of advanced oral drug delivery technologies supported by versatile excipients is required to foster the required levels of bioavailability. Additionally, due to their poor permeability, BCS class IV drug compounds may benefit from the inclusion of excipients with known permeation-enhancing properties.

Numerous technologies are currently in use and in development that are designed to enable the oral delivery of small molecules. Though each has its unique set of properties and capabilities, all must overcome key obstacles to successfully deliver small molecules via the oral route.

However, before any technology is applied to confront these challenges, developers must first target therapeutic small molecules that are appropriate for oral delivery. Practical considerations, such as whether the orally delivered drug will enhance patient compliance, increase treatment options, and boost marketability, should have priority because, without clear medical and business advantages, there is little motivation to transition from an injectable.

Yet, even if these boxes are checked, oral delivery may not be an option unless one can achieve therapeutically relevant bioavailability. Numerous factors impact bioavailability, some of which technology can mitigate.

The use of permeation enhancers in solid oral dosage forms has lagged behind their use in other drug delivery technologies, such as nasal and transdermal. This is likely due to a general unfamiliarity with permeation enhancers for oral use, in terms of their applicability, manufacturability, and regulatory status. However, in certain areas, such as oral delivery of biologics (especially peptides), their use has gained considerable traction and acceptance.

Research and Discovery teams are faced with the challenge of working with poorly-soluble compounds during various in-vitro and in-vivos creening studies. Generally unable to take advantage of the sorts of solubilisation technologies available to formulation and manufacturing groups, for a variety of reasons, R&D teams resort to approaches that tackle solubility but may not be translatable to a finished dosage form.

For example, emulsions may offer a convenient solution to solubility, but may not be the preferred clinical and commercial formulation. Conversely, when a drug candidate is moved forward from R&D into development, the formulation group is now faced with finding a formulation principle that addresses solubility through a scalable manufacturing process that aligns with the desired clinical and commercial attributes of the product. There are, of course, instances where a manufacturing process cannot reach the solubility achieved by the vehicles employed by R&D groups, resulting in the iterative cycle between R&D and CMC teams, as various lead compounds are passed back and forth. Ideally, R&D teams would have access to convenient technologies for solubilisation and bioavailability enhancement that can be translated to a robust, scalable manufacturing process.

In developing orally delivered small molecules, Enteris BioPharma utilises its ProPerma platform to take advantage of the highly-absorptive surface of the small intestines and then promote absorption of the API into the bloodstream. The ProPerma approach utilises an enteric coating surrounding a tablet core containing the API with solubilising agents that are also known to have permeation-enhancing properties.

Furthermore, the ProPerma excipients can be formulated as aqueous liquid vehicles representative of a dissolved solid oral dosage form. This aspect of the technology is a useful feature for R&D groups, because they can work with a convenient form of a solubility and permeation-enhancing platform that is translatable to a tablet or capsule.

Enteric coatings work by presenting a surface that is stable at the highly acidic pH found in the stomach, yet dissolves at the higher pH of the small intestine and at locations within the intestinal tract to enable optimal drug absorption. A variety of materials can be utilised as an enteric coating, provided the material shields the tablet core in the stomach and enables its release in the intestine where absorption into the bloodstream can occur.

Dissolution of the enteric coating releases the tablet core in the small intestines, an environment ideally suited to the absorption of small molecular-weight compounds. Successful delivery of the drug into systemic circulation at this point hinges on solubilisation of the API followed by permeation, either by transcellular or paracellular routes, across the epithelium and into the bloodstream. This may be the most challenging barrier to small molecule delivery.

Enteris’s ProPerma technology tackles both issues of solubilisation and permeation through the use of solubilising agents that are also permeability enhancers. Often, these are surfactants or emulsifying agents, such as acyl carnitines, sucrose esters, or anionic surfactants. Such permeability enhancers function by enabling the transport of small molecules through the epithelium via passive movement across the tight junctions, or by the transcellular route, crossing the cell membrane. Enteris has reduced to practice manufacturing tablets and capsules with high levels of these excipients.

In developing small molecules, Enteris’s ProPerma platform utilises a combination of enhancers. The first, citric acid, has multiple functions. First, it acts as a permeation enhancer by making the tight junctions more porous, through multiple pathways, which enhances paracellular transport. It also makes the mucus layer less viscous, thus removing a diffusion barrier to permeation. Finally, it contributes to the solubility of basic drugs by protonating them, which confers positive charges, thereby increasing water solubility.

In combination with citric acid, Enteris employs one or more solubilizing agents – for example, the aforementioned acyl carnitines, sucrose esters, anionic surfactants, or other similar agents. These work to both solubilise the API through their surfactant properties, and also to promote permeation by increasing the number of loose tight junctions. Citric acid makes these loose tight junctions even more porous. Thus, the two excipients work together to address both solubility and permeability.

The development of poorly soluble drugs, especially those which are also poorly permeable, may seem discouraging on the surface, but there has been significant investment in the development of small molecule dosage forms by specialized drug delivery companies. This is based on the clear advantages that such medications offer patients, prescribers and pharmaceutical developers, alike.

Ultimately, not all small molecule, peptidomimetic and macrocyclic therapeutics are appropriate for oral administration due to various constraints, from physiochemical to economic. However, for those that meet the necessary criteria, advances in formulation technologies coupled with favorable market dynamics will continue to drive interest across the entire prescription drug spectrum for safe and effective orally administered small molecule therapeutics. 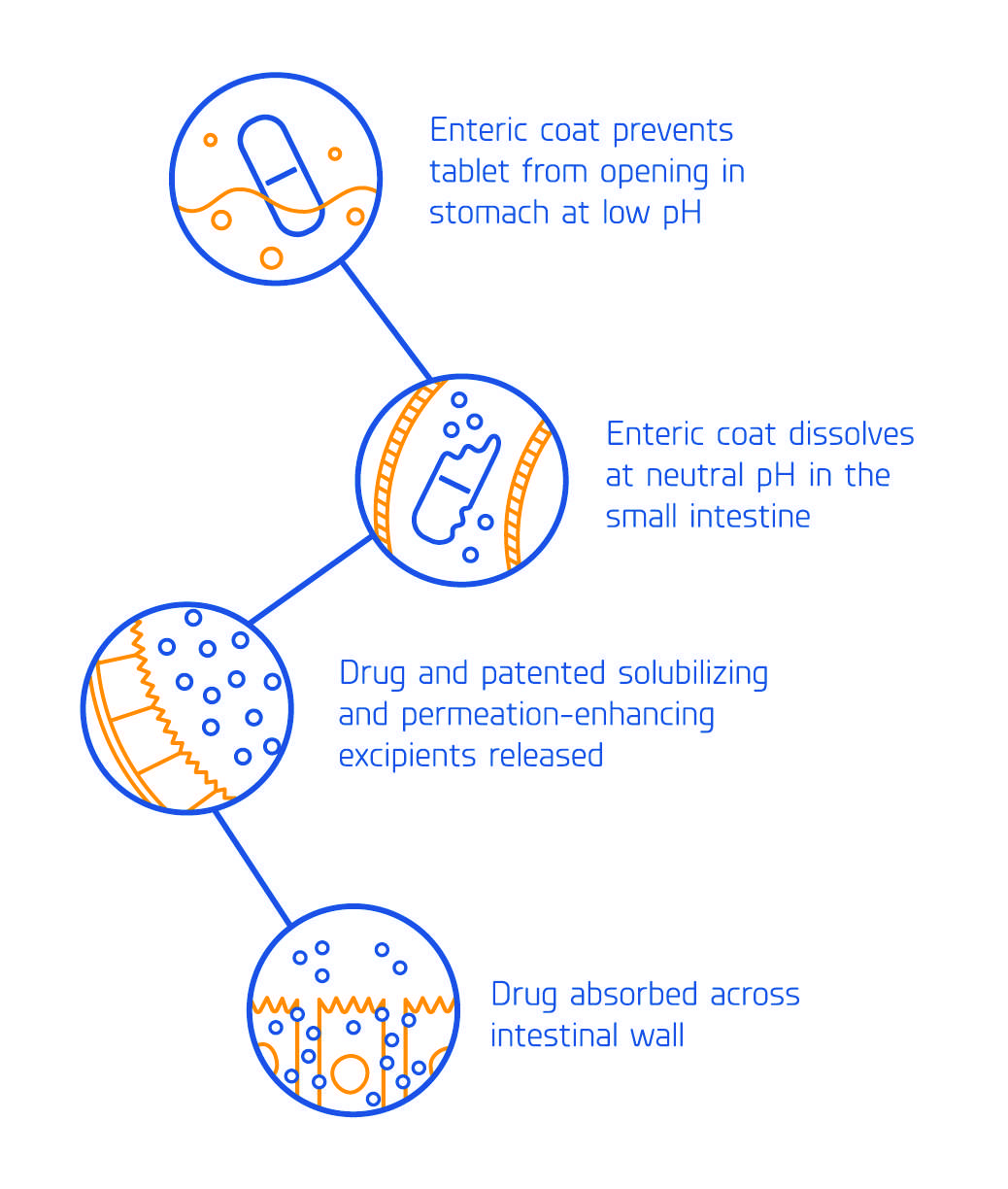 John S. Vrettos, PhD, is the Senior Principal Scientist and Head of Formulation Development at Enteris BioPharma, a privately held, New Jersey-based biotechnology company offering innovative formulation solutions built around its proprietary drug delivery technologies. Dr. Vrettos holds a B.A. in chemistry from Haverford College, a Ph.D. in Biophysical Chemistry from Yale University, and was a National Academy of Sciences/National Research Council Postdoctoral Fellow at NIST. He has over 17 years of experience in protein, peptide and small molecule drug formulation and delivery.